A Glossary Of Bread

A story that explores a woman's restless childhood through the various types of bread she encountered. 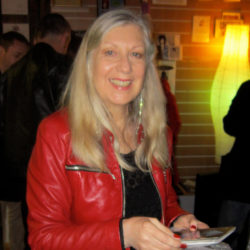 ROLL: A small individual loaf of bread, properly one rolled or doubled over before baking (OED).

Rolls. This is what we call them nowadays, any miniature loaf of any consistency or shape - a generic label on supermarket shelves everywhere in an age of mass distribution and multinational food corporations, the old specific local names deleted or displaced as national retail specialities. It's what Janey and I now call the soft round ones we are buttering for our father's funeral.

I lever them open and smear their yielding white insides. Janey folds them closed again on ham, which throughout our childhood our father banned from the house, but gave in and ate in the end.

The clock ticks on the wall, time catching in the throat.

We used to call them baps, says Janey, but we can neither of us remember where this was or when.

Was it Rhyl? Where we landed up in the early fifties, too young at the time to think of them as the post-war years? We had left a world of green where the past looked out of framed photos with faces that were familiar and which people told us were like our own. The place of our grandparents, our mother's parents. Our mother's world.

Here where our father had brought us, there was concrete and neon. Here we didn't know a soul. Here was being adrift and knowing not just the strangeness of everything around you, but that of your own. Our father's world.

Here our mummy didn't go to church any more, not simply because she didn't want to, we guessed. Her smile was brittle. Daddy was brooding and silent. There was darkness, brown paint and shadow in our flat above the baker's, and harsh buffeting light on the flat breathless prom. A scary height from our window to iron pavement below.

This was the place where we started to cringe.

We waited with our baby brother's pram while Mummy went into the baker's. Piled up in the window were baps, if that was what we called them then: forbidden, too expensive for us, for people like us (though there weren't any other people adrift and inexplicably uneasy like us). Nothing for what they cost, mere crumbs. But not nothing: delicate drops, golden, dusted with flour, promising softness and warmth. Our mouths watered. We leaned our foreheads on the glass.

And then Mummy came out again carrying the loaf in its bag of cellophane with its ready-cut slices which tasted rubbery and cold, her smile too bright. 'Come on!' she cried, too brightly, and stuffed the loaf in the pram where it squashed and then bounced back again into shape, 'Let's go for a walk on the prom!'

And set off, and we followed, and her blue silk dress, handed down from a better-off aunt, lifted up and shivered in the agitated air, then flapped around my legs as I kept up at the side.

Bap. A plump word, a word with softness, but also the sound of something tapping. Did we take it there with us from the safer place we had left, an old English word from a comfortably anglicised vale of Wales, or did we pick it up then, like one of the pebbles thrown up by the storms onto that concrete-strangled Celtic shore?

BARA. The Welsh word for bread. We never took it on our tongues, which we'd stopped with our thumbs. We sat dumb in the lessons. In the evenings we were speechless and stilled as music outside sobbed from the arcades and we waited in fear for Daddy to come home.

And then suddenly, unexpectedly, we moved again, to a town in the English Midlands where the bread rolls went by a different name. Was this the place where they called them buns?

There were boys who threw stones because of how we spoke. We ducked the stones, we learnt to hear our own accents as strange, our names for things as alien and archaic, and quickly spat them out, forgot them, as no longer our own.

We were as foreign to our father as he was to us, with his silence, the mere crumbs of his history, the distant land of his birth he hardly ever mentioned, his failure to bequeath us a sense of continuity or belonging.

His eyes would glitter at us blankly. He would stay away for days and then the lights of his car returning up the drive would throw shadows like swooning bodies down the hall wall.

In the sparse cold house, we would come into the kitchen and find our mother bent over at the table weeping.

Somewhere else we lived, they called them cobs.

He hit me on the head, caught me a stinging blow on the ear. He was lashing out now, unpredictable, uncontrolled.

We kept away. We ran the streets, the blackened terraces of ports and mining towns, the tumbling tenements of a Scottish city; we joined the gangs, learnt the street games, sucked on sweets in the insular raucous haven of street-light glow, gobbled up the catchwords of each new place like chameleons snatching flies. Stayed out as long as possible, knowing that the longer we did, though, the more likely we'd be to get the stinging slipper or the biting cane or the burning snapping belt.

COB: Meaning also to strike on the buttocks with an instrument, as a punishment. Nautical, mid-eighteenth century.

Also: to get a cob on: to become angry. Slang, mid-twentieth century, origin unknown. (Shorter OED, 1993).

Whichever place it was we lived where they used the word cob, the term was specific, meaning precisely not a soft but a hard-crusted roll.

We got hardened. We got clever.

Muffins they called them in Glasgow. 'Do you want a muffin?' a new friend's mother asked me, and though I expected something like a crumpet (Shorter OED 1993: MUFFIN: a flat circular spongy cake of bread often eaten toasted), I didn't miss a beat when she handed me a plain bread roll. I was coming to revel in overturnings of the standard definitions, in the interchangeability of terms: the word bap turning up again, not this time as a name for small rolls but for the large flat breads which in yet another place were called oven bottoms. I loved the subversion of generic confusions, the fact that in some places bread rolls were called cakes.

Barmcakes, they called them, in that flat Midlands town where I finally rebelled.

BARM: from Old English, probably in turn from Low German, beorma: the froth on the top of fermenting malt liquor; yeast (Shorter OED, 1993).

I was twelve and full of ferment, fizzing with possibilities, with a sense that no definition or state of affairs was ever set in stone, that all realities could shift, be challenged. I challenged him: jumped like a lizard out of the way so he flailed the air, answered back from a safer distance while he stood there wild, barmy, and though it meant I'd get a worse beating in the end, I was high with a sense of reality new-coined.

I said (hardly flinching) that I wanted to go to chapel. I didn't really, but a boy I fancied had invited me, and I was challenging all of my father's hegemony, which included, I had always thought, a ban on our mother's religion.

He didn't snap. He scowled, but he didn't bristle or glare.

Time dissipates the meanings. No definition or state of affairs is ever set in stone.

He said he wouldn't stop me.

I felt triumphant. I knew I looked it, and contemptuous. I saw him see it, and look away. His shoulders slumped.

He looked back up, his eyes white-hot. He said carefully, bitterly, almost sarcastically, that the last thing he'd ever wanted to do to me was blight my life over religion, the thing that had once been done to him.

BREAD: a word which has passed from its original meaning broken piece or pieces through the sense of 'piece of bread' into that of bread as a substance (OED, 1933).

When his key breaks off on the inside of his apartment, the narrator must fight bureaucracy and apathy in increasingly desperate attempts to

The Dog and the Sparrow

A sparrow avenges her friend a dog, who is cruelly killed by a man.

The Certification of Brandon

A young man hangs himself in prison. Public defender Audrey Meyers reflects on the events that led to his death.