A modern history of the Levant

A long way overhead a jet soared, like a gull on currents of air. 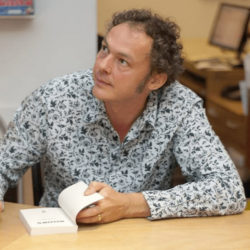 The path took the men along the edge of a cliff overlooking the sea. It rose and fell and rose again, winding through dry yellow earth. It was too hot to be walking so far and the men were weary. They came across an outcrop of rock, shaded by a solitary fig tree. The first man said shall we take five? and slipping out of his pack, rested himself against the tree. His companion followed suit and the two of them sat shoulder to shoulder and looked out across the deep green water, to the hazy curve of the horizon.

The men wiped their brows with their sleeves. Sheesh, it's hot said the second man and the first man said: got that right.

Do you reckon it's hotter than that place last year?

The city on the river. With the date palms.

Me neither, said the second man, I mean that was wet heat. This is dry heat. Like the desert with the ants.

The desert with the ants?

I don't remember the ants.

Why would you? said the second man, and he smiled, it wasn't your ankle they took a liking to.

The two men took a sip of water from a bottle they passed between them. Down below there was a ship, cutting grey and shark-like through the sea. I'm hungry, said the first man.

It was good wasn't it? said the second man.

They sipped at their water. The second man shook his head.

Will you listen to us? Talking about eating goat, like it's no big thing. Can you imagine if we hadn't been doing this, all this time. Shoney's, that's what we'd be talking about. Whereas now we're talking about goat.

A long way overhead a jet soared, like a gull on currents of air. The second man followed its path. I mean it's funny isn't it? We've had some crazy times, man, I've taken some crazy photographs – that woman on the back of the motorbike, the piles of fruit in that market. The hats at that wedding – sheesh!–

–but I think it's the food that's going to stick with me. The goat. What was that thing last summer? Was it sheep? And the rabbit! Man, that rabbit.

Yeah. Now that was something else.

The first man frowned. I don't remember the rabbit, he said.

The second man's voice tailed off. The first man stood up and looked up at the sky. It was impossibly blue. There was a school, he said.

I know, said the second man.

He got slowly to his feet, patted the first man on his shoulder. The first man flinched. He bowed his head. Assholes, he said and he punched the trunk of the fig tree. Assholes he said, and he punched the tree again – assholes! ASSHOLES! – shouting the word now, punching the tree again and again, and he kept on punching the tree until his hand was useless, a grotesque, distorted and bloody mess of flesh, torn skin and bone, until the yellow earth was spattered with dark splashes of blood.

A newly imported King of England finds a harsh - but effective - way of dealing with the country's feminists.

The Straw, The Coal and the Bean

A Brothers Grimm fable about how beans came to have a black seam!