The water is pink, the blood seeping into the crystals. 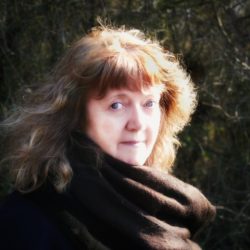 He comes in with his shirt splattered with blood, and I say, 'Honest to God, Kieran.'

'Don't fuss, Mum,' he says like it's nothing to walk in the house with your nose spread across your face.

'What in Jesus' name happened?' No answer. 'Who were you with?'

'And are they hurt too?'

I put my hand up to his face, but he dips from it. 'It's a rough old place, that dancehall. Tiffany's was it?'

And then his father's in the doorway, and I say, 'Will you look at the state of Kieran?' But he's three sheets to the wind himself, so I send him off to bed.

Well, I try to whip the shirt off the boy, but he holds it close around him. So I get a bucket ready: cold water with a good dash of salt. 'Come on now, Kieran,' I say, 'Let's have that shirt.' It's one of his good ones, a Ben Sherman. He unbuttons it. There are bruises like footprints on his chest.

'Did you get a look at them? Could you describe them to the police?'

'You've bruises all over!'

He flinches as I touch him. I can see that he's trying to hold on to the tears. I know the wobble in that lip, like when his father used to tell him that boys don't cry, so he'd sniff the snot back up into his nose, and pretend he was all right. But a mother knows. But a mother only knows by rummaging in his chest of drawers when he's out, through the piles of pennies and silver in the top drawer from his turned out pockets. I go in there when I'm short of money for the milkman, or need a 50p when the electric's gone. He doesn't like the rattle of the coins in his pockets, and how they spoil the line of his trousers. So they pyramid higher in the drawer, silver on copper, and slip like the coal in the bunker as the drawer opens, heavier each time I pull it out. And that's where I found that thing once, from a packet of three as they call it, and only the one left. I told him what Fr Westland would say. He just laughed. Though there have been times when I've thought, wouldn't we have been glad of one?

He's been worse since he's been working, acting like he's man of the house. Home at six, he slams the back door open against the kitchen dresser – there's a hole in the hardboard now – then he shouts, 'Where's my dinner?' When he was small, I could slap him across the back of the legs, but now he stands above me. I need to stand on a chair to look him in the eye.

'I'm off to bed,' Kieran says. I watch as he climbs the stairs, every step an effort. Whether he sleeps or not, I don't know, but I lie awake next to his snoring father. Every time I close my eyes, I can't stop seeing the footprints on my boy's chest.

In the morning, he's so stiff he can hardly raise an arm, so I knock at Mick Bennett's house, and ask would he tell them at the factory that Kieran won't be in. Then I run Kieran a hot bath to see would it ease him a little, and make him egg and bacon when he's out and dressed. Although it hurts to see him like that, it's nice, in a way, to have my boy to myself, with Jack and the children off for the day.

I've the radio on in the kitchen, and the news headlines come over, of the latest from the IRA, a pub in Guildford, not ten miles up the road. I know there'll be hard stares when I ask for the veg at the greengrocer, when I open my mouth to speak, as if it was me that laid that bomb. 'Are you ready to tell me?' I say, as he wipes the yolk of his egg off the plate with a half-bitten slice of fried bread. He holds up his mug, and I pour some more tea. 'Shall we go to the police?' He half-drains the mug, then slams it down on the table. The tea splashes up the sides then settles again. 'Or was it you that started it? I know your temper.'

The full story of the bombing comes on the radio. 'Switch it off,' he says.

'God knows why your father stands up for that lot,' I say, 'it doesn't do us any good, those of us that have to live here.' He stares at his plate, his fingertips pressing into the edge of the table. 'Is that what the fight was over?' I say.

I wipe my hands on a tea towel and turn to him. 'Only every ounce of blood that flows through your veins.'

'It don't make me Irish.' He butters a slice of bread. I can see how it's bothering him to eat, with his top lip split. Part of me wants to slap him, and the rest of me wants to cradle him. I picture him lying on the ground as the heavy boots hit his chest. And I think of how he's stopped going to the Tara club, how it's Tiffany's on a Saturday night, out with his packet of three: Durex, approved to British standards.

I go to the bucket where I'd steeped the shirt the night before. The water is pink, the blood seeping into the crystals. I drain the bucket into the sink, rinse the shirt, then run more cold water into the bucket, emptying the remainder of the packet of Saxa into it. I watch the shirt sink, pushing it down so it's covered.

Where I Was From

I live in a college town in western Oregon and lately people here have been talking about their small-town Midwestern upbringing like it was a war they...

The pineapples arrived six or twelve at a time.“A half dozen or a dozen,” Culver said and Jane wondered why she hadn’t thought to group them that way in her...

Every night Staley Fleming wakes and sees in his room, intently watching him, a big black Newfoundland dog.

The Musicians of Bremen

An old donkey, dog and cat find a new home for themselves after scaring some robbers.