Four elderly men in tracksuits passed the bench. He noticed one of them, a white-bearded man, thin and pale with a long nose, was staring pointedly, annoyance frozen on his face. 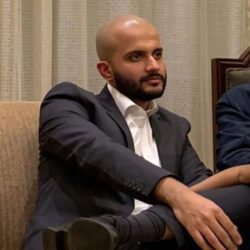 She sat down next to him on the wet bench in the park. “Your sister texts me all the time,” she said.

The air is so still, he thought. Summers in Lahore. Stale, unmoving, moist. The air-conditioner was probably running in his study, and Blood on the Tracks was playing on repeat. He felt calmer every time he heard it. Like placing a cork back into your heart. If he could catch a tune sitting here, maybe. He looked around but the air was just air.

“How are you?” she sniffed.

“She says your mother says that something is wrong with you. She says you behave strangely.”

He knew all about that but he said, “What exactly do you mean?” His voice was cold and he thought it would be nice to be cold from now on.

“Your mother says you’re always lost in thought, you never come out of your room and you don’t answer when someone speaks to you.”

He didn’t want to cry in front of her. After a moment, he was sure that wouldn’t happen. He said, “I have been working on my applications. Mama and Honey have nothing else to do.”

He saw that she was smiling. She had always liked talking about his mother and sister.

“Are the guests still there?” she asked.

“Even the Canadian ones?”

“I’m sorry. That sounds awful. Have you had to give up your room?”

Four elderly men in tracksuits passed the bench. He noticed one of them, a white-bearded man, thin and pale with a long nose, was staring pointedly, annoyance frozen on his face. He stared back at the man but did not say anything.

“But it cannot hurt to talk about it,” she continued as if there had been no pause in conversation. “What did you do today, for instance?”

“I read a poem by William Blake and masturbated and then I read many more poems of William Blake. Then I showered and shaved and—”

“Must we speak like this?” He was not looking at her but he could tell the face she was making. He knew all her faces.

She stood up. He stood up and took out his phone from his pocket and glanced at it.

“Are you in a hurry to return?” she said.

“First, the mosque inside the park. Second, the sign outside this section says Children’s Park.”

“I am always afraid that the constable will come and tell me to leave because I am watching the children or something.”

“Has that happened yet?”

“No, it has not happened yet.”

They walked on a brick-lined path. She was shorter than him and her skin was darker and she wore too much perfume as usual. How could he have thought she was the same person as him? He looked at her from the corner of his eye. She looked like someone he dreamed about once. They passed a fountain in silence. Such an odd noise the water made when it fell on the blue tiles. A moaning.

There were no birds in sight but he saw pigeon droppings on the cement slabs around the fountain. An unemptied trash can in the corner reeked of rotten fruit. A beggar dipped her feet in the water. A grimy shawl spread on the ground. Coins and notes shimmering

She bent towards the shawl and dropped a note. Then she put her glasses on.

May you have beautiful kids, the beggar called after them in Punjabi.

She asked him what the beggar had said. He told her.

They continued to walk in silence and he noticed the path they were taking was one he often took.

He came to the park before sunrise every morning when the air was cold and there was no dust because the sweepers came in the afternoon. The only people who came that early were the old people who liked sitting on the wet benches after the Fajr prayers and the soldiers from the cantonment nearby who ran in the park. The soldiers wore white vests and camouflage trousers and they ran in such narrow formations, he thought they were drawing something vital from each other’s bodies. When they passed him in the trails, two or three soldiers always smiled at him. After the soldiers were finished running, they stretched in a treeless patch of the park. He smoked a cigarette and watched them. When his cigarette was finished he returned home. At home—everyone still slept—he used the privacy to use the kitchen. He boiled chai in a pan on medium heat. He poured the chai in a mug when he was happy with the color. Then he poured himself a glass of water from the sink and drank it quickly. He washed the glass and the pan and wiped the counter. Then he carried his mug to his room. He sat on the edge of his bed and placed the mug on the table. He pushed the window open and stared outside. Major Ijaz, who lived two doors down the street, paced alone on the road. He was a short portly man, retired from the army. He belonged to the qadiani sect. He had five grown daughters. He tried to kill himself last year by lying down in front of the train tracks but a bystander saved him. He received electric shock treatment and was recovered, it was said. Major Ijaz wore a vacant smile on his face and if he saw someone on the street he always stopped to have a conversation.

“What are you thinking about?” she said.

They were standing near the section where the soldiers stretched every morning. He began to feel the usual emptiness and wondered what he would feel once she left.

He looked at her mouth. The sounds came from there.

When did he become this person, he wanted to ask her. A creature from a song.

“Don’t be by yourself all the time,” she said.

He said goodbye. She reached out and held him. She kissed him on the neck. Then he heard the sound of an ambulance going somewhere. He broke away from her.

She said goodbye and touched his arm.

Before she left, she snorted. She said, “How come you never brought me here?”

He laughed with her and nodded.

After she left, he remained standing there and lit a cigarette. The light was nice in this part of the park and in the evening there was no dust in the air because the sweepers came in the afternoon.

All that summer he continued to walk in the park and he often thought maybe he would see her coming through a corner. He looked for her and wished he knew how he ended here. Many people who came to the park must be in similar predicaments. This was no extraordinary matter, he thought. Could happen to anyone. A simple twist of fate.

Fiction by A. J. McKenna

A man visits his wife in hospital.

The tree stood at ten, maybe twelve feet tall, but as far as the boy was concerned, it might as well have reached the grainy, spring sky.

The Purple Of The Balkan Kings

Luitpold Wolkenstein, financier and diplomat, sits in a cafe in Vienna and contemplates news of the rise of the Balkan States.

It's Just The Sun Rising

A girl celebrates her father's birthday.