The tree stood at ten, maybe twelve feet tall, but as far as the boy was concerned, it might as well have reached the grainy, spring sky. 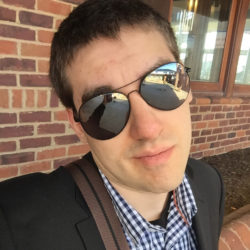 Layne stood to the side, watching as his father prepared to cut down the pine tree in their backyard. The tree stood at ten, maybe twelve feet tall, but as far as the boy was concerned, it might as well have reached the grainy, spring sky. First, the father removed whatever branches there were on the sides. Then, he climbed up and tied one end of the rope above the middle of the tree. Layne looked up, amazed at how his father maneuvered himself so far off the ground. Once he made it back down, he handed his son the other end of the rope.

"What if it falls before you're ready?"

"That's why I'm having you hold the rope," his father joked. "If it does, pull it away from me." Layne hoped he was only kidding. The pressure of having to stop his father from being crushed at five-years-old was too great.

"He'll be fine," his father called out. Layne turned around to see his mother peering down at them from the elevated front porch, which looked out over the backyard. "When I start cutting, just make sure you stay back," his father told him before shooting another look back up.

"Okay," Layne said, looking around, wondering how far back he should stand. By the time he turned back around, his mother was gone. He then asked, "Why are we cutting it down?"

"Because your mother wants it down."

Trying to be funny, Layne recited a line from some movie that he recently saw: "So, you just do everything mom tells you?"

His father laughed. "Well, she's right. It needs to come down. Look at this," he said, pointing to the sugary liquid that oozed from several different spots on the tree.

"What is it?" Layne asked as he wiped some of the sticky fluid off the hard bark and rubbed it between his fingers.

"Why is it dripping?"

"It could be a bunch of reasons," his father said. "Some dripping is okay, but when it's been bleeding for as long as this one, something is wrong; bacteria, fungus, insects, even woodpeckers. Do you ever hear the woodpeckers in the morning?"

"Sometimes," Layne said, wiping the sap on his cargo pants.

"It could also have been damaged during one of the hurricanes last season. There's been a lot more lately," Layne's father said, looking up at the gray sky. "The hurricanes will be starting up again soon. We don't want the tree falling into the house."

One night, not too long ago, Layne was in the living room with his mother when a car pealed out in the street. The screech was long and loud, and in his mind, he could see the car crashing through the front window. The thought of their own tree doing just that was no better.

As Layne's mind wandered, his father dabbed his finger with some of the sap and rubbed it across his son's forehead.

"Hey!" Layne jumped backward; half annoyed, but somehow half joyous.

"I bless you, my son," his father dramatized, crossing the two of them. He then proceeded to cut a V-shaped notch into the front of the tree with his chainsaw. The springtime air was masked by a smell that Layne couldn't quite place. He waited until his father was finished weakening the base before he asked what it was. "It's the tree," his father said. "It's dying."

Layne could barely hear his father speak, as his ears were still ringing from the chainsaw. He didn't have a particularly strong connection to the tree. He played underneath it countless times, but was only now acknowledging its existence; now that it would be gone forever.

"Do you want to help me pull?"

As sorry as he felt for the tree, Layne couldn't help but jump at the chance. "It'll be like a game of tug of war."

"Get in front of me," his father said. The boy did; the sap still on his forehead. It itched, but he wasn't willing to take his hands off the rope to scratch it. "Are you ready?"

Layne nodded, and together, they pulled. He didn't know how much he was actually helping, but Layne pulled with everything he had. His heels, digging into the soil. His back, suspended in mid-air as he kept holding onto the rope. "There it goes," his father hollered. There was a long, drawn-out snap. It was unlike anything Layne had ever heard before. He clenched his face — as he often did when he was nervous — watching as the trunk plummeted towards the earth. Layne shuddered as the ground quaked. His father, however, remained unflinching.

Layne felt his mother's eyes on them again, but was hesitant to look back. His father must've felt the same thing. He turned and gave a quick nod. "He's fine," he told Layne's mother. Again, she stood on the porch for a moment before heading back inside.

The father and son walked over to the tree and stood over it for a moment, looking down. Neither spoke. It was a shame, Layne thought. Other than the bleeding spots, the tree, for the most part, looked healthy. But then he noticed the part that was still sticking up from the ground. It wasn't as fresh as the rest. It was decayed; flaking at the roots.

"How old was the tree?" Layne asked.

"I don't know," his father shrugged. "It was here when your mother and I moved in; before you were born. I would say fifteen or twenty-years-old, but it could be older."

"I can't imagine being that old."

His father laughed. "Just wait until you're my age."

"So, I can do all the things you do — like climb a tree that high, and be strong enough to pull it down. I can't do anything yet. Nothing."

His father laughed again. "Do you see this?" he asked, pointing to the rotted part of the trunk, sticking up from the ground.

"Yes," Layne said. "Is that why the sap was dripping?"

"Probably," his father said. "Whatever the problem was, it started at the bottom and was working its way up. Do you know how it got this way?"

"You said before: it could be a bunch of things."

"Yes, but mainly, the tree got old," his father said. "You see, when something is young, it's helpless. Now, that's not necessarily a bad thing. It's actually a beautiful thing to be weak. That means something is sensitive, but still resilient to everything around it. Strength, on the other hand, makes everything hard and unforgiving. It becomes dry and jaded. Weakness is everything, and strength is nothing, because weakness is only the beginning, and anything that is strong is already dead."

They then began disposing of the tree. The father cut with the chainsaw while Layne carried whatever pieces he could manage over to the tarp-covered firewood rack in the corner of the yard. Each time he went back and forth was harder than the last; the weight on his shoulders, the crisp, rigid wood on his hands. But he kept going, back and forth, across the misty lawn. It took all the strength that he had. And he longed for the strength that he would have in the future — the strength that prepares us for the day that the sap finally runs out.

The splotch that his father put on his head still itched, but Layne made sure to be as careful as possible while scratching it. He wanted to leave it for as long as he could.

The pineapples arrived six or twelve at a time.“A half dozen or a dozen,” Culver said and Jane wondered why she hadn’t thought to group them that way in her...

Death came around once a month...

The Robe Of Peace

The strange and incredible truth behind the sudden disappearance of Johnny Bellchambers.