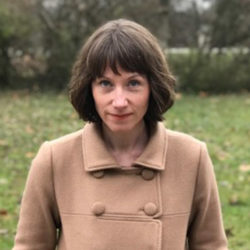 The article said it helps to look for one thing,
as a way of accidentally discovering something else.
I picked bears. I was looking for bears.

It didn’t work. I mean
all I ever got was bears.

The secretary at the elementary school
which had recently seceded
from the Governor Wentworth District
was a bear, and also a steamboat enthusiast.

At the galleryI saw a miniature daguerreotype
of a bear reclining naked
on a mossy embankment.

I was reminded of my childhood ballet teacher,
her elegant teeth.

I complained to my friends.I said I am looking for bears
and I am finding them everywhere
but I am not finding, for example,
a town in Tennessee
populated entirely by historians
who refute the Persian Wars.

My friends looked at one another
and ordered a new round
while at the back of the room
a bear in a tiny car
drove in circles on the platform.

Maybe you have a similar problem.
Maybe for you it’s phone booths
which you chose for their disappearance
and their mostly romantic history.

When I arrived at the motel room
the bear was already there, shivering,
because of the air conditioner
which we could not control.

All night long the television
broadcast interviews on hibernation.
At three I fell asleep, informed.

An acorn falls on Chicken-licken's head, and the sky falls down!

And This Too Comes Apart