Death came around once a month... 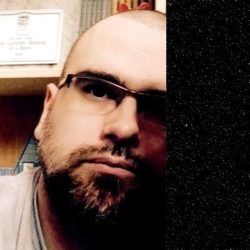 Two spoons. A dried-up apple. A roadmap of Slovakia.

When I walked through those doors... That's what was in my suitcase. Rattling around.

I don't remember packing the suitcase.

I don't remember walking through those doors.

They keep a record of everything, here.

Outreach Arms was built in the 50s — the building. It was a beer bottling plant back then. When the economy got lymphoma, the plant sat empty for a decade. Then a philanthropist, Allan Eddy, turned the brick building into "the largest men's shelter, chapel and soup kitchen in the nation." A one-stop destination for the indigent. Mr. Eddy ran the place for twenty years. When he got lymphoma, his daughter Brenda took over.

Until last week, the basement was still filled with beer bottles. Practical glass bottles that didn't know their destiny was to sit empty in the dark for forty years.

If I even think of those bottles for a second...

I get depressed as hell.

The first thing I remember anyone saying to me...

It was the old guy. Orville. At lunchtime.

The only open spot was across from him.

He ate like a freed POW. His beard was 3'2. The tip dipped into his bowl the whole time.

He grabbed my hand.

"A dream," he said. "Your old life. Tell yourself it was a dream. Then believe it."

The mole between his eyes was as big as an eyeball.

He released my hand. And leaped back onto his soup.

I had a headache, that first year. I couldn't think, so I listened.

"Everything we have is donated. There's a wishlist but companies give us what they can."

One company donated a thousand bags of shredded coconut. We could've filmed a Christmas show.

Another company donated expensive leather notebooks. They looked good enough to eat. I took one because the library had just donated pencils. I thought sketching might help pass the time. Or writing things down...

Food tastes better if you complain about it.

Men with wrists as hairy as Orville's scare the hell out of me.

Jerry glued two cigarette butts together and grinned all day.

I guess it helped a little.

Death came around once a month. Dr. Death. Dangstoff — an old German. He might've been Russian. He gave us penicillin if we needed it. The government — or I'm not sure who paid for this.

"Just my head," I'd always answer.

"As long as I can remember."

Brian occasionally knocked his head against the wall, all day. These were brick walls. Sometimes he needed stitches.

"Try wear helmet, o-kay?" Dangstoff would tell him. Then he'd give him a shot of penicillin. After getting his shot, Brian typically stopped hitting his head for a while. And started biting his arm.

I guess it helped a little.

Orville didn't finish his soup. Not this time. His beard fell into the bowl, then his face.

There was a service for him in the chapel. The chapel's non-denominational but there's an eight-foot crucifix above the door.

He scattered Orville's ashes in the back alley, after.

"It's what he wanted," Brenda said to me. Then she passed me a ziplock bag. There was a watch in it.

"He wrote his will last week, on a soup label. I guess he knew."

I didn't even know Orville wore a watch. He was that hairy.

It wasn't a nice watch and it didn't run.

I put it on anyway.

The bald guy looked forty but said he was seventeen. He was drunk.

Brenda unzipped his backpack and reached inside.

Out came a black comb. A raffle ticket for a '76 Mustang Convertible. A bottle of beer.

Brenda opened the record book. And wrote it all down.

In my notebook, I sketched the backpack and the bottle.

Death didn't come around, one month. I guess he died.

His replacement was a young Egyptian. Mudada.

When Mudada stepped up to me... He kept looking at one side of my face, the other.

"When did you have your stroke?" he asked.

"I don't remember having a stroke," I said.

He sent me for a CT scan.

There was a bullet in my brain. Just barely sticking in the cerebellum. The skull had healed years ago.

"When did you get shot?" Mudada asked me.

"I don't remember getting shot," I said.

After the surgery, I was a new man. No more headaches. I still couldn't remember getting shot but I remembered having a chequing account with $10,000 in it.

I bought new shoes. A nice suit and tie.

I bought a battery for Orville's watch. That's all it needed.

I found an apartment close to downtown. A cheap apartment is expensive as hell. I searched for work like a madman for a year. A skull will heal but the hole in your resume...

The third time the landlord knocked, my heart fell down into my shoe.

I folded my suit and tie, lowered them into my suitcase.

I walked through the doors of Outreach Arms.

This time, I remember.

We were running out of space. Outreach had been getting ten or twelve guys a month, for months. It was built to house a few hundred men but there were close to a thousand, now. Sleeping in hallways. Laundry hampers. The army donated ancient cots but we needed space.

So Brenda got us to clean out the basement. She even paid us a little.

It took weeks to clear out all the bottles. A million bottles, there must've been. They were filthy. There were mice in a lot of them. We tossed them into a dumptruck.

When I tossed the last box of bottles...

I didn't want to be around people.

They moved us to the basement. All us older guys. The young ones stay upstairs. The hopeful cases.

It's dark down here. The lights are burned out. The bulbs are obsolete. Even the army doesn't have any. Brenda thinks we might still get some, eventually. Maybe.

All we can do is wait.

A Matter of Sentiment

The day before the big race and those gathered for Lady Susan's house-party are keen that their money be on the right horse.

Did you know sometimes I take little Joel to your graves? I weed. He runs whooping through the stones, over bodies. He scalps Indians, beheads terrorists....

My bed has been made, though not by me. Who has made this bed? It is one more thing I cannot figure out.For many years I made our bed, to give our children...

The Logistics of Nikolai

Steve interviews Nikolai, the Beast from the East.