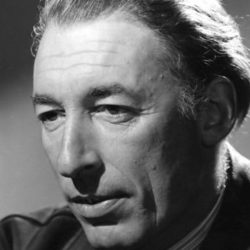 In the first taxi he was alone tra-la,
No extras on the clock. He tipped ninepence
But the cabby, while he thanked him, looked askance
As though to suggest someone had bummed a ride.

In the second taxi he was alone tra-la
But the clock showed sixpence extra; he tipped according
And the cabby from out his muffler said: ‘Make sure
You have left nothing behind tra-la between you’.

In the third taxi he was alone tra-la
But the tip-up seats were down and there was an extra
Charge of one-and-sixpence and an odd
Scent that reminded him of a trip to Cannes.

As for the fourth taxi, he was alone
Tra-la when he hailed it but the cabby looked
Through him and said: ‘I can’t tra-la well take
So many people, not to speak of the dog.’

The Formation of Hurricanes

Whatever hour you woke there was a door shutting. From room to room they went, hand in hand, lifting here, opening there, making sure--a ghostly couple."Here...

One day Andrew was out in his yard. He was watering some flowers.There was a clop, clop behind him. He looked and there stood a white horse with...