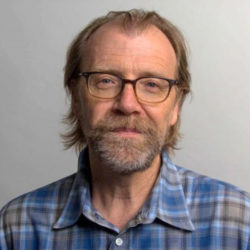 I never could stomach Adams and then one day he’s standing in my kitchen, in his underwear. Facing in the direction of my kids’ room! So I wonk him in the back of the head and down he goes. When he stands up, I wonk him again and down he goes. Then I roll him down the stairs into the early-spring muck and am like, If you ever again, I swear to God, I don’t even know what to say, you miserable fuck.

Karen got home. I pulled her aside. Upshot was: Keep the doors locked, and if he’s home the kids stay inside.

But after dinner I got to thinking: Guy comes in in his shorts and I’m sitting here taking this? This is love? Love for my kids? Because what if? What if we slip up? What if a kid gets out or he gets in? No, no, no, I was thinking, not acceptable.

So I went over and said, Where is he?

To which Lynn said, Upstairs, why?

Up I went and he was standing at the mirror, still in his goddam underwear, only now he had on a shirt, and I wonked him again as he was turning. Down he went and tried to crab out of the room, but I put a foot on his back.

Now we’re even, he said. I came in your house and you came in mine.

Only I had pants on, I said, and mini-wonked him in the back of his head.

Well, that took the cake! Him admitting it! So I wonked him again, as Lynn came in, saying, Hey, Roger, hey. Roger being me. And then he rises up. Which killed me! Him rising up? Against me? And I’m about to wonk him again, but she pushes in there, like intervening. So to wonk him again I had to like shove her back, and unfortunately she slipped, and down she went, and she’s sort of lying there, skirt hiked up—and he’s mad! Mad! At me! Him in his underwear, facing my kids’ room, and he’s mad at me? Many a night I’ve heard assorted wonks and baps from Adams’s house, with her gasping, Frank, Jesus, I Am a Woman, You’re Hurting Me, the Kids Are Watching, and so on.

Because that’s the kind of guy he is.

So I wonked him again, and when she crawled at me, going, Please, Please, I had to push her back down, not in a mean way but in a like stay-there way, which is when, of course, just my luck, the kids came running in—these Adams kids, I should say, are little thespians, constantly doing musicals in the back yard, etc., etc.—so they’re, you know, all dramatic: Mummy, Daddy! And, O.K., that was unfortunate, so I tried to leave, but they were standing there in the doorway, blocking me, like, Duh, we do not know which way to turn, we are stunned. So I shoved my way out, not rough, very gentle—I felt for them, having on more than one occasion heard Adams whaling on them, too—but one did go down, just on one knee, and I helped her up, and she tried to bite me! She did not seem to know what was what, and it hurt, and made me mad, so I went over to Adams, who was just getting up, and gave him this like proxy wonk on top of his head, in exchange for the biting.

Keep your damn, I said. Keep your goddam kids from—

Then I needed some air, so I walked around the block, but still it wasn’t sitting right. Because now it begins, you know? Adams over there all pissed off, saying false things about me to those kids, which, due to what they had seen (the wonking) and what they had not seen (him in his underwear, facing my kids’ room), they were probably swallowing every mistruth, and I was like, Great, now they hate me, like I’m the bad guy in this, and all summer it’s going to be pranks, my hose slit and syrup in my gas tank, or all of a sudden our dog has a burn mark on her belly.

So I type up these like handbills, saying, Just So You Know, Your Dad Was Standing Naked in My Kitchen, Facing My Kids’ Room. And I tape one inside their screen door so they’ll be sure and see it when they go to softball later, then I stuff like nine in their mailbox, and on the rest I cross out “Your Dad” and put in “Frank Adams” and distribute them in mailboxes around the block.

All night it’s call after call from the neighbors, saying, you know, Call the cops, Adams needs help, he’s a goof, I’ve always hated him, maybe a few of us should go over there, let us work with you on this, do not lose your cool. That sort of thing. Which was all well and good, but then I go out for a smoke around midnight and what is he looking at, all hateful? Their houses? Don’t kid yourself. He is looking at my house, with that smoldering look, and I am like, What are you looking at?

You fuck, I say, and rush over to wonk him, but he runs inside.

And, as far as cops, my feeling was: What am I supposed to do, wait until he’s back in my house, then call the cops and hope he stays facing my kids’ room, in his shorts, until they arrive?

No, sorry, that is not my way.

The next day my little guy, Brian, is standing at the back door, with his kite, and I like reach over and pop the door shut, going, Nope, nope, you know very well why not, Champ.

So there’s my poor kid, kite in lap all afternoon, watching some dumb art guy on PBS saying, Shading Is One Way We Make Depth, How About Trying It Relevant to This Stump Here?

Then Monday morning I see Adams walking toward his car and again he gives me that smoldering look! Never have I received such a hateful look. And flips me the bird! As if he is the one who is right! So I rush over to wonk him, only he gets in the car and pulls away.

All day that look was in my mind, that look of hate.

And I thought, If that was me, if I had that hate level, what would I do? Well, one thing I would do is hold it in and hold it in and then one night it would overflow and I would sneak into the house of my enemy and stab him and his family in their sleep. Or shoot them. I would. You would have to. It is human nature. I am not blaming anybody.

I thought, I have to be cautious and protect my family or their blood will be on my hands.

So I came home early and went over to Adams’s house when I knew nobody was home, and gathered up his rifle from the basement and their steak knives and also the butter knives, which could be sharpened, and also their knife sharpener, and also two letter openers and a heavy paperweight, which, if I was him and had lost all my guns and knives, I would definitely use that to bash in the head of my enemy in his sleep, as well as the heads of his family.

That night I slept better until I woke in a sweat, asking myself what I would do if someone came in and, after shoving down my wife and one of my kids, stole my guns and knives and knife sharpener as well as my paperweight. And I answered myself: What I would do is look around my house in a frenzy for something else dangerous, such as paint, such as thinner, such as household chemicals, and then either ring the house of my enemy with the toxics and set them on fire or pour some into the pool of my enemy, which would (1) rot the liner and (2) sicken the children of my enemy when they went swimming.

Then I looked in on my sleeping kids and, oh my God, nowhere are there kids as sweet as my kids, and standing there in my pajamas, thinking of Adams standing there in his underwear, then imagining my kids choking and vomiting as they struggled to get out of the pool, I thought, No, no way, I am not living like this.

So, entering through a window I had forced earlier that afternoon, I gathered up all the household chemicals, and, believe me, he had a lot, more than I did, more than he needed, thinner, paint, lye, gas, solvents, etc. I got it all in like nine Hefty bags and was just starting up the stairs with the first bag when here comes the whole damn family, falling upon me, even his kids, whipping me with coat hangers and hitting me with sharp-edged books and spraying hair spray in my eyes, the dog also nipping at me, and rolling down the stairs of their basement I thought, They are trying to kill me. Hitting my head on the concrete floor, I saw stars, and thought, No, really, they are going to kill me, and if they kill me no more little Melanie and me eating from the same popcorn bowl, no more little Brian doing that wrinkled-brow thing we do back and forth when one of us makes a bad joke, never again Karen and me lying side by side afterward, looking out the window, discussing our future plans as those yellow-beaked birds come and go on the power line. And I struggled to my feet, thinking, Forget how I got here, I am here, I must get out of here, I have to live. And I began to wonk and wonk, and once they had fallen back, with Adams and his teen-age boy huddled over the littlest one, who had unfortunately flown relatively far due to a bit of a kick I had given her, I took out my lighter and fired up the bag, the bag of toxics, and made for the light at the top of the stairs, where I knew the door was, and the night was, and my freedom, and my home.

A Drama of Our Time

Relaxing at home, Fernando spots an attractive young woman on the balcony opposite.

Waking up on Saturday morning with a hangover having lost his company's biggest account, the narrator takes steps to retain his job.

Seeking shelter for the night, a wounded man breaks into a bizarre, abandoned chateau decorated by an unusually large number of paintings.

A coulple are left in charge of a difficult young girl while her mother visits a Casino.