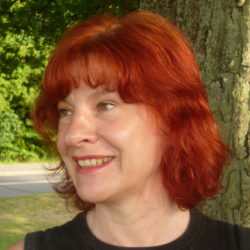 It was Christmas the first time they made love; he said it felt like coming home. He bought her a silver bracelet with a chunky heart charm.

He moved in to her house. She was good for him; they noticed the new positivity at work. He was good for her; she started writing again. That Christmas, he bought her a little silver typewriter charm.

The next was a white Christmas. The snowflakes arrived like the cavalry in their trillions ('each one is different, you know'); blessing, caressing their street so that, instead of the patchwork tarmac road and narrow rickety block pavements, there was a soft, still river of glitter. No one could get their cars out. Oh the velvety peace! Silence, like that Christmas carol. Shoulders relaxed, everyone beamed at each other, drank the soft air into their lungs and just breathed. The roads belonged to the people again ('you can walk in the middle of the A21!'). He couldn't drive to work. Without a word, they both ran, slippily into the middle of the street in their black wellies, flump-scrunch, flump-scrunch and then they span, with their arms outstretched, him in his navy wool work coat, her in her emerald green duffel. Then she said, 'this is as free as flying...' and he understood. That Christmas, he gave her two silver filigree snowflake charms ('for that day').

The next Christmas it didn't snow. He'd been promoted and he bought her house from the landlord for them. That year she had a perfect little silver house charm.

The year after, he gave her driving lessons and a racing car charm ('because it's time you learnt').

The following year, it must have snowed first, but she only remembered the ice; snow compacted, beaten down to glass. The pavements were suffocated by it; no-cigar scratch cards and empty fag packets encapsulated like long-dead creatures in amber. The people complained the council had not gritted the pavements ('and the council tax is extortionate'). She had to try and steady herself with bits of wall, railings, mittens sodden, fingers ice-bitten. She could no longer trust her legs, her feet sliding away from beneath her; trying not to look a fool and wondering, did she feel this much fear every time she fell as a child? That Christmas he'd been promoted again. He bought her a little silver pound sign ('sterling silver sterling: see? I can play with words, too!').

They argued over a dog. She wanted paws in the house, eager eyes, something to cuddle. He saw picking up poo and having to drag out to the park in the cold. He was resolute. That Christmas, she had a silver dachshund charm ('and that's the only bloody dog you're getting').

The solicitor said she could not have the car, but she could have the house, the typewriter and the dog. The heart was mangled anyway, she no longer wanted that. All she really wanted was the snowflakes.

A family start a war with nature when they move to the country.

The room was suddenly rich and the great bay-window was Spawning snow and pink roses against it Soundlessly collateral and incompatible: World is suddener...

They would have the time of their lives. A long time.

A man makes a living out of other people's superstitions.