Every night Staley Fleming wakes and sees in his room, intently watching him, a big black Newfoundland dog. 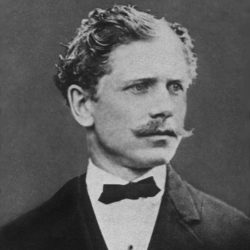 Of two men who were talking one was a physician.

'I sent for you, Doctor,' said the other, 'but I don't think you can do me any good. Maybe you can recommend a specialist in psychopathy. I fancy I'm a bit loony.'

'You look all right,' the physician said.

'You shall judge -- I have hallucinations. I wake every night and see in my room, intently watching me, a big black Newfoundland dog with a white forefoot.'

'You say you wake; are you sure about that? "Hallucinations" are sometimes only dreams.'

'Oh, I wake all right. Sometimes I lie still a long time, looking at the dog as earnestly as the dog looks at me -- I always leave the light going. When I can't endure it any longer I sit up in bed -- and nothing is there!

'It seems to me sinister. Of course I know that, except in art, an animal's face in repose has always the same expression. But this is not a real animal. Newfoundland dogs are pretty mild looking, you know; what's the matter with this one?"

'Really, my diagnosis would have no value: I am not going to treat the dog.'

The physician laughed at his own pleasantry, but narrowly watched his patient from the corner of his eye. Presently he said: 'Fleming, your description of the beast fits the dog of the late Atwell Barton.'

Fleming half rose from his chair, sat again and made a visible attempt at indifference. 'I remember Barton,' he said; 'I believe he was -- it was reported that -- wasn't there something suspicious in his death?'

Looking squarely now into the eyes of his patient, the physician said: 'Three years ago the body of your old enemy, Atwell Barton, was found in the woods near his house and yours. He had been stabbed to death. There have been no arrests; there was no clue. Some of us had "theories." I had one. Have you?"

'I? Why, bless your soul, what could I know about it? You remember that I left for Europe almost immediately afterward -- a considerable time afterward. In the few weeks since my return you could not expect me to construct a "theory." In fact, I have not given the matter a thought. What about his dog?"

'It was first to find the body. It died of starvation on his grave.'

We do not know the inexorable law underlying coincidences. Staley Fleming did not, or he would perhaps not have sprung to his feet as the night wind brought in through the open window the long wailing howl of a distant dog. He strode several times across the room in the steadfast gaze of the physician; then, abruptly confronting him, almost shouted: 'What has all this to do with my trouble, Dr. Halderman? You forget why you were sent for.' Rising, the physician laid his hand upon his patient's arm and said, gently: 'Pardon me. I cannot diagnose your disorder offhand -- to-morrow, perhaps. Please go to bed, leaving your door unlocked; I will pass the night here with your books. Can you call me without rising?"

'Yes, there is an electric bell.'

'Good. If anything disturbs you push the button without sitting up. Good night.'

Comfortably installed in an arm-chair the man of medicine stared into the glowing coals and thought deeply and long, but apparently to little purpose, for he frequently rose and opening a door leading to the staircase, listened intently; then resumed his seat. Presently, however, he fell asleep, and when he woke it was past midnight. He stirred the failing fire, lifted a book from the table at his side and looked at the title. It was Denneker's Meditations. He opened it at random and began to read:

'Forasmuch as it is ordained of God that all flesh hath spirit and thereby taketh on spiritual powers, so, also, the spirit hath powers of the flesh, even when it is gone out of the flesh and liveth as a thing apart, as many a violence performed by wraith and lemure sheweth. And there be who say that man is not single in this, but the beasts have the like evil inducement, and -- '

The reading was interrupted by a shaking of the house, as by the fall of a heavy object. The reader flung down the book, rushed from the room and mounted the stairs to Fleming's bed-chamber. He tried the door, but contrary to his instructions it was locked. He set his shoulder against it with such force that it gave way. On the floor near the disordered bed, in his night-clothes, lay Fleming, gasping away his life.

The physician raised the dying man's head from the floor and observed a wound in the throat. 'I should have thought of this,' he said, believing it suicide.

When the man was dead an examination disclosed the unmistakable marks of an animal's fangs deeply sunken into the jugular vein.

But there was no animal.

A man notices a small wart on his left hand.

The Glugs of Gosh - Joi, the Glug

The Princess of Canterbury

A foolish boy takes a chance on impressing a Princess and wins her love.

One day Jacob was out in his yard. He was sitting in the shade of a big tree. His dog was with him.“It is hot out here,” he said to his dog. Just then a...