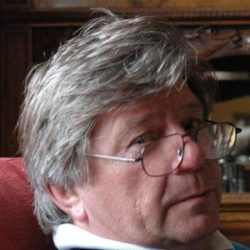 Cast off the mooring ropes at bow and stern
head out into the early morning mist
hoist the big mainsail, free the jib, and turn
feeling the filling canvas make her list.

The venerable diesel chugs and splutters
its smoky wraith lingering in our wake.
We weave our way between sloops and cutters
cleaving across crests beginning to break.

Waves slap the hull and slither down the deck
we've left the strident seagulls far behind.
The lighthouse beam pales as we pass the wreck
whose rusting iron ribs still groan and grind.

We round the point and catch the tidal flow.
Astern, a fresh Force 4 lends us its wings
No engine needed now. I go below
and listen to the sounds that silence brings.

One day Jacob was outside looking at his dog. As it happens, he heard a meow, meow.“What was that?” he asked his dog. He looked at his feet and there was a...

Because we are mammals we illuminate glasses of milkWe make wine and play the triangle whose corners ring through us to the nightWe are mammals in the...

The Sun in a Box

When I was younger I drafted a memory. I drew a rectangle on a piece of card and called it a computer. Happy hours spent playing with framed nothing...